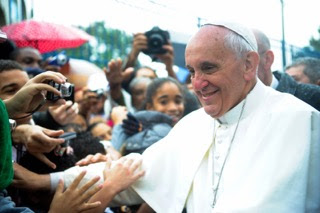 I don’t know how you could miss the news today but just in case: the Pope is visiting the United States. Restoration is not Roman Catholic and neither am I but if you think about it historically “all of us” come from the same Christian family tree. And so I am fascinated by the media analysis of the visit of this extremely influential Christian leader. News commentators are offering endless explanations of Pope Francis’ powerful appeal in America, even though he is the head of one of the most unchanging and longest standing institutions in the world, the Roman Catholic Church.

As reporters speak about Pope Francis, they attempt to align his statements about capitalism, abortion, Cuba, climate change, homosexuality, immigration, marriage, poverty, forgiveness, and numerous other topics with American political sentiments. The usually informed political commentators fall short when announcing him as either a reformer or defender of the church. And they cannot decide if he is a friend or foe of the varied social and political causes that dominate our news cycle.
Pope Francis is not a conservative Republican or a progressive Democrat. He’s has no need to identify with a position in the American political spectrum. What he has emphasized over and over is that he is a pastor, interpreting scripture and thinking theologically for the sake of the people in his church. I will quickly add that I don’t agree with all of the doctrines of the Roman Catholic church but I admire the commitment to discern the work of the Kingdom of God without following the social and political whims of the day.

“Let the children come to me; do not hinder them, for to such belongs the kingdom of God” Mk. 10:14

We can learn many things from Francis’ example that help us as followers of Jesus. First of all, learn to look to the Gospels to understand our mission instead of being swayed by every new trend and concern. We seek power for a Christian cause but we forget Jesus said, “Let the children come to me; do not hinder them, for to such belongs the kingdom of God” (Mk. 10:14). And we quickly lose confidence in his promise, “But seek first the kingdom of God and his righteousness, and all these things will be added to you” (Mt. 6:33).
When we say that the mission of Restoration is to join God in the restoration of all things, we mean that we believe that God is already at work and we need only to discern what he is doing and accept his invitation to join the mission of the Kingdom of God. And when we find the work of the Kingdom in our world we are free to be extravagantly generous because the love and forgiveness we offer comes from the limitless resources of Jesus. When Francis washed the feet of prisoners, women, the disabled, and even a Muslim man as a part of his commemoration of Jesus’ ministry on Maundy Thursday2013 it made international news. He shocked the world by simply joining in the work of Jesus and putting it on display for everyone to see.
Secondly, we can find freedom in leading in the name of Jesus instead of needlessly rushing to his defense. Often you will hear someone say, “Isn’t it about time the Church caught up with the rest of the world.” And then points an issue of inequality or a major cultural shift where churches differ. We simply do not take our cues from the world. Though Christians are often on the side of social justice, it is not our motivation. In these situations, we seek to do what Jesus is doing. He gives us a glimpse of his Kingdom that is coming in scripture and so we should always ask, “What is the Kingdom of God like?” and then aim for Jesus’ intended restoration of all things when he returns.
Christians have often failed to resist societal evil for the sake of the Gospel. Frequently, we even claim that we should be accommodating in order to attract more people to the Gospel. But no one is more attractive to the world than Jesus. He doesn’t need to be propped up or repackaged. Jesus is filled with truth that saves from the clutches of death and grace that grants new life. We couldn’t possibly say it better than he already has.
As Pope Francis spends his next few days here in the United States, watch the cultural response to this man who may be the most visible Christian in the world. See how he eschews partisanship and chooses the life and ministry of Jesus as his model for engaging people. Though he is not flawless, he is quick to find his confidence in the Kingdom of God that is eternal instead the earthly powers that shift like sand. Pray for renewal in the lives of our Roman Catholic brothers and sister as they celebrate this week.
And let us all follow Francis’ example to seek the Kingdom of God first and enter into the mission of Jesus for the world today. As the press makes their best attempts to understand this humble man who stands outside of their categories of power and influence, just remember how desperately the world wants to see Jesus in you and me too.
Grace & Peace,
Amy Flickinger
Next
Welcoming Our New Family Minister